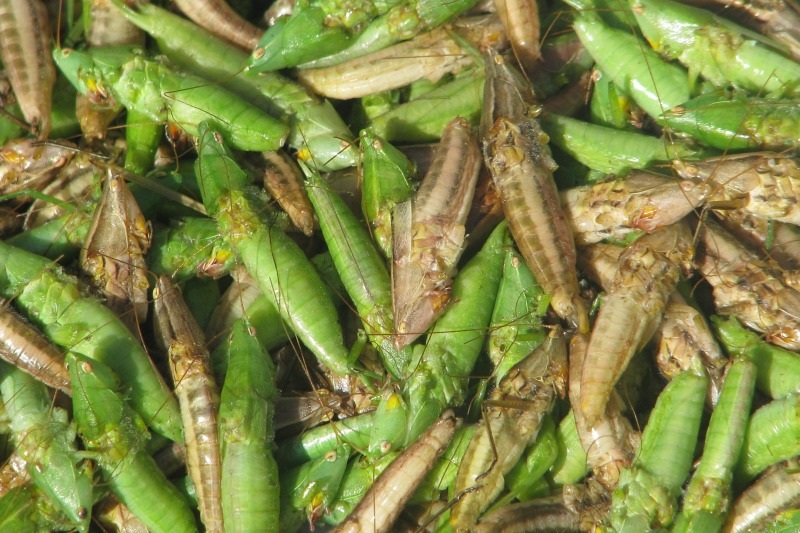 In a development which has economic, environmental and social benefits that could support the United Nations’ Sustainable Development Goals, universities are contributing to the upscaling of insect-based food and feed systems in Sub-Saharan Africa,

These efforts come at a time when the importance of science to secure improved nutrition and food security has been highlighted at dialogues in preparation for the 2021 United Nations (UN) Food Systems Summit in September.

Various higher learning institutions from Kenya, Uganda, South Africa, Zambia, Ethiopia and Zimbabwe have been taking up the challenge and redirecting resources towards studying the potential of insects for food and feed systems.

In addition to tackling food security and nutrition challenges, the initiatives could also contribute to waste management.

According to the UN Food and Agriculture Organization, small-scale farmers in Africa are witnessing a sharp increase in the price of animal feed. At the same time, malnutrition and food insecurity remain serious problems in Sub-Saharan Africa due to limited access to proteins.

Scientists have now reiterated the importance of edible insects as an inexpensive alternative source of animal protein for humans and livestock due to their nutritional value and efficiency in food conversion.

In Kenya, black soldier fly farming (commonly known as BSF) is gaining momentum. Some experts say it is a pathway to improving livelihoods as farmers struggle to overcome the impact of COVID-19.

The Rockefeller Foundation is supporting the International Centre of Insect Physiology and Ecology (or ICIPE) in Kenya with a grant of US$600,000 to test business models for scaling up an insect-based feed for poultry and fish farming.

“We have been pioneering this area of research since 2013,” Chrysantus Mbi Tanga, a senior scientist who specialises in research on insects for food, feed and other uses at ICIPE, told University World News in a recent interview.

He added that “since then, we have been training farmers” to rear protein-rich maggots and insects on their farms.

“ICIPE has partnered with many universities,” Tanga said, indicating the central role that higher education continues to play in enhancing food security and nutrition.

Shem Ariwi is among more than 2,000 smallholders in Kenya who have been trained to set up insect-based enterprises. He is determined to use insects as an alternative to overcome the rising costs of poultry feed.

For Ariwi, some help has come from Jomo Kenyatta University of Agriculture and Technology (or JKUAT), which has researched insects for food and feed systems since 2006.

“In poultry farming, the feed, itself, is a very big component of the cost of production and we’ve always been looking for ways to reduce that,” he said recently, adding that JKUAT trained him to raise insects used as animal feeds.

“They trained us and told us about the black soldier flies, which have much higher production returns than crickets,” Ariwi explained.

“Black soldier flies are exceptional,” said Dr Isaac Osuga, a senior lecturer at JKUAT’s department of animal sciences, who has undertaken joint research with ICIPE on insects as protein feed additives for poultry, pigs and fish.

“In the feed industry,” he said, “among all the other insects, the BSF is what I would call the king.” He said it is also the easiest to rear because it thrives under ordinary conditions and feeds only on organic waste and is not a pest.

In recent years, JKUAT has performed joint supervision of BSc, MSc, and PhD students with ICIPE.

ICIPE researched more than 28 insect species, including locusts and crickets, before settling on the black soldier fly larvae as the best way forward.

Studies carried out in Kenya and Uganda demonstrated that insects, such as the black soldier fly and crickets, can be safely fed to poultry without compromising food safety standards.

“This work started in 2013 when the UN Food and Agriculture Organisation started promoting the use of insects for human food or animal feed,” Osuga, who doubles as an animal nutritionist, said.

Breeding the black soldier fly also contributes tremendously to reducing food waste from the environment. Tonnes of food waste is now re-used to feed the larvae. The UN says more than 1 billion tonnes of food produced globally gets lost or wasted each year.

Fish, pig and poultry farming are among the fastest-growing agricultural subsectors in Africa. Tanga said that has helped to improve household livelihoods and increase income levels among farmers.

However, the use of expensive inputs such as fish and plants as feed ingredients is threatening the survival of smallholders.

According to researchers, protein ingredients such as soybean and fish meals in the market are not only expensive to produce, but their production cycles can have a strong negative impact on the environment.

“This is quite understandable,” said the Cameroonian-born scientist, “because of competition for human nutrition, and [the fact that] arable land and water are dwindling drastically due to climate change.”

Additionally, there is also overfishing in the oceans.

“And so, there’s a scarcity of fish that has tended to cause an increase in the price of these major protein sources,” Tanga remarked.

In Uganda, Makerere University has tested a ready-to-eat grasshopper product and the result has demonstrated enormous demand. According to Tanga, ICIPE has been working with Makerere University on insects for food and feed over the past seven years.

The ICIPE-led initiative has entered its second phase, which includes scaling up and finding market linkages that will benefit farmers. So far, Tanga said, through other donor funding, more than 11,000 farmers have been trained across Africa, adding that plans are underway to expand to different countries, including Rwanda.

The various initiatives and their economic, environmental and societal impact have been part of discussions about the UN Food Systems Summit and the UN Sustainable Development Goals.

The potential economic impact could flow from insect-related businesses providing income through small and medium enterprises in insects’ mass rearing and insect-based food processing by youths and women.

As far as the environmental impact goes, insects convert waste or feed into valuable biomass more efficiently than livestock. Substitution of meat with insect protein would help to reduce the environmental burden on water and land used compared to animal production due to overexploitation and habitat change, thus contributing to SDG12 (responsible consumption and production); SDG13 (climate action), SDG14 (life below water) and SDG15 (Life on land).

The initiative can also have a societal impact as it contributes to food and nutrition security through increased food quantity and quality, reduces poverty through decent job creation; and even shrinks the gender gap by empowering women and youth.

Consequently, researchers add, it can also contribute towards meeting SDG2 (zero hunger); SDG5 (gender equality) as well as pillar three (increased food supply and reduced hunger) of the Comprehensive Africa Agricultural Development Plan and also the first aspiration of the African Agenda 2063, a prosperous Africa based on inclusive growth and sustainable development.